Witness the birth of electronic music in Canada. Rare digitized film, slides and artifacts from tribe magazine will take you deep into raves, warehouse parties and events from 1993 and beyond. 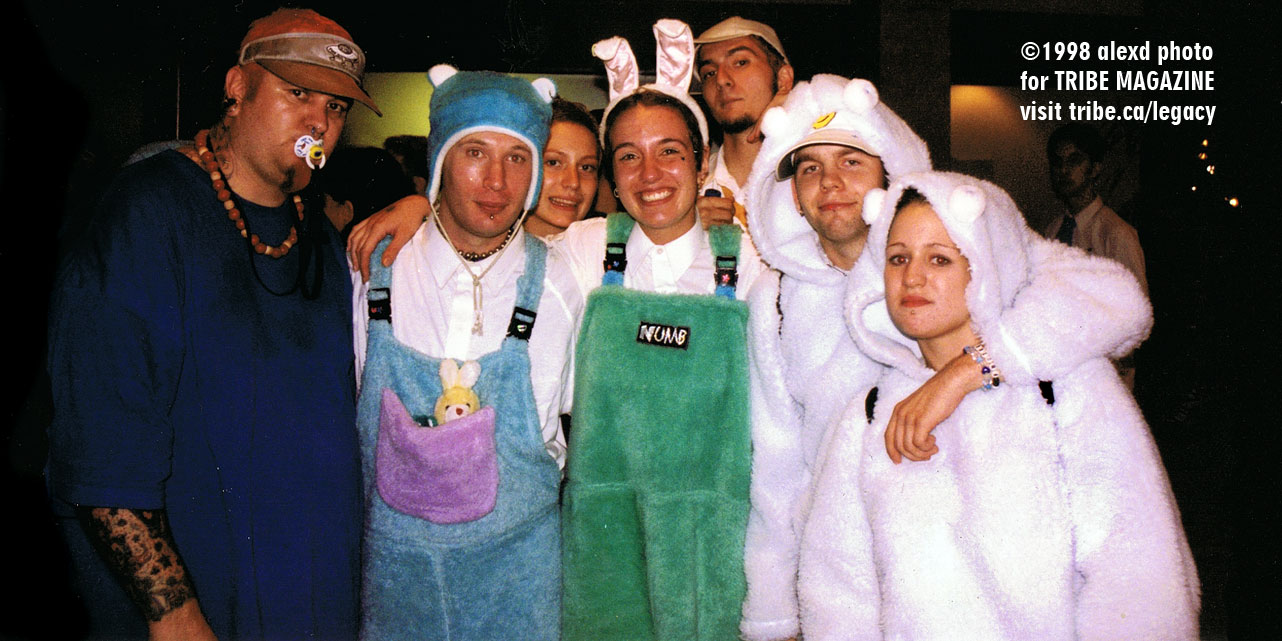 Not everyone wore Fun Fur, but some wore it spectacularly.

Across from MuchMusic, at the top of the graffiti covered 162 John St. stairway, you’d find X-STATIC, Canada’s first rave store. The nerve center of Canada’s early rave scene, X-STATIC was a tiny shop packed with DJ Mix tapes, event tickets, rave-wear, and the latest issues of TRIBE MAGAZINE. This is a full page ad they ran in TRIBE in 1994.

It was dark in there but I lit the room with giant flashes. House music all night long.

Adrienne, João and Pilar dance in a photo studio on Carlaw St. for a TRIBE MAGAZINE photo feature.

Thundergroove at OZ the nightclub on Mercer Street was the house night in Canada in 1994. Every week you could hear the finest house DJs in the world spin in the same small, cramped, booth as the finest house DJs in Canada. This was the night where the industry people hung out – the other DJs, bartenders, waiters, promoters, fashion models, house curious rave kids, the ‘it’ boys and girls. This was where the term ‘industry’ was coined to describe the people who worked in and around the house music, rave or nightclub scene. A distinct subset of people in the Canadian underground. The people who knew. The bar staff  who finally had a night off. The house heads. The DJs. The promoters. The flyer people. The people who appreciated and danced to non-mainstream music, weeks or months before anyone else would even hear it.

How Close We Got Kamikazi Toronto 1999

Ravers packed in tight at the Kamikazi rave in Toronto in 1999.

Ravers wait for the shuttlebus at dawn to head home from the Dose RUN DMC rave in Toronto in 1999.

Derrick Carter DJs from the dancefloor at INDUSTRY nightclub in Toronto in 1998.
INDUSTRY stripped away all the non-essential fluff, creating the perfect environment for dancing to house and other genres of electronic music. Putting the DJ right on the dancefloor in the crowd and the records on the stage is a perfect example of this. FYI, that’s Elon Musk in the green shirt, dancing.

Lina peeks at the crowd from backstage at a fashion show in Toronto in 1997.

* Tribe is a registered trademark of Alex Dordevic, used under license by tribe communications incorporated.